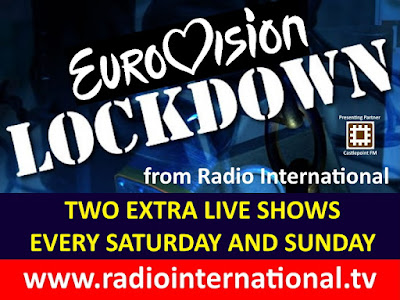 CONTENT OF TODAY's  SHOW
First Hour:
THE HAPPY EUROVISION HOUR:  JP will start in the first hour with some Eurovision Classics, your listener's requests and new material of Eurovision artists that have reached the Radio International Tower of Eurovision Power.  Also revisiting a Eurovision Song Contest and plays five songs from a particular Eurovision Year.

Second Hour:
EUROVISION SPOTLIGHT XXL: A Eurovision Double Shot with Marcus Keppel Palmer: Eurovision Lord Marcus Keppel Palmer joins JP in the studio via SKYPE to present an hour of rarely played Eurovision songs from the past. Marcus selects two songs per country. So it's all a surprise to what he is coming up with - even JP does not know. :) Enjoy Eurovision Royalty with Sir Marcus.

Third Hour:
EUROVISION SPOTLIGHT XXL:  Sweden's Melodifestivalen with Robert Wahlstroem:  Now that Norway's Melodo Grand Prix 2021 is over and TIX is the act to represent Norway at the Eurovision Song Contest Robert Wahlstroem from Gothenburg in Sweden, who prepared us for Melodi Grand Prix, now will give us a pile of songs from the very famous Melodifestivalen in Sweden that did not do much in terms of the result however, are great favourites of the many fans of Sweden's biggest music competition.
Fourth Hour:
EUROVISION SPOTLIGHT XXL: My Eurovision Top Ten: The series continues where Eurovision personalities are co-hosting an hour with JP together and to present their ten most favourite songs from the Eurovision Song Contest. Last week JP was joined by the great Nicki French from the United Kingdom. Nicki represented the United Kingdom at the Eurovision Song Contest 2000 in Stockholm, Sweden with the song "Don't play that song again".  Nicki presented her favourite Eurovision Top Ten but there is still an hour of Eurovision entries that are Bubbling Under Nicki's Top Ten - so Nicki is back this week joining JP for a second session to listen to some great Eurovision songs as well as listening to  Nicki's great stories she is going to share with us on this particular Eurovision Lockdown.