Radio International - The Ultimate Eurovision Experience is broadcast from Malta's Radio 105FM on Tuesday evenings from 2100 - 0059 hours CET. The show is also broadcast on Switch FM in the United Kingdom live on Wednesday evenings from 1900 - 2300 hours CET as well as on the Facebook Page of Eurovision Radio International with an interactive chatroom. 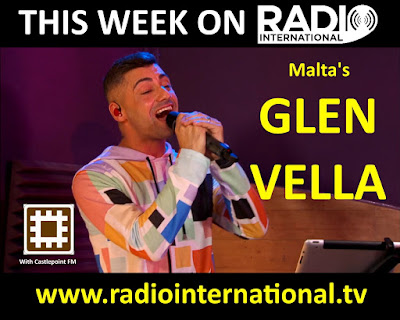 This week Radio International's Interview Team JP, John Dawton, Marc and Salman are being joined again, via SKYPE  by Glen Vella for the continuation of the interview Radio International did with Glen on 03 Feb 2021 - (click to listen). Last March, Glen Vella won the all new music event entitled Muzika Muzika or Festival Kanzunetta Maltija 2021 with the song "Marsa Biss". This happened ten after he won the Malta Eurovision Song Contest 2011 with the song "One Life" with which he  represented the Pearl of the Mediterranean sunny Malta at the Eurovision Song Contest 2011 coming 11th in Semi Final 1 in Duesseldorf, Germany. Glen missed ONE point to make that step into the Grand Final of Eurovision 2011.

Glen started his singing career at the age of 13 and studied both practical and theory in voice and piano. He is certificated in voice coaching from the Victoria Music and Arts College London and is a residential singer on various popular TV-shows in Malta including 'Kalamita', 'Showtime', 'Sa 6' and 'Sibtijiet Flimkien'. In addition, Glen also played main roles in various musicals on the local stage, including 'Jesus Christ Super Star', 'Godspell' and 'Abba Mania'.

The Interview Team of Radio International is very much looking forward to having Glen Vella on the show for the interview hour. Listeners are encouraged to actively take part during the show to submit their questions to the artist via our Facebook Chatroom during the live broadcast on Wednesday evening from 1900 - 2300 hours CET or via our website's email address - click here.